On a Sunday afternoon, a human chain was formed in front of a building at Chinatown. The collective activism was initiated after the opening reception of The Voiceless Rise Up, an exhibition about the Chinese MeToo movement located at Access Theater. Participants of various ethnicities, gender, and age were all holding hands, shouting messages supporting the Chinese MeToo movement and survivors of sexual violence. When a video clip of the act was uploaded on Weibo (commonly described as the Chinese version of Twitter), someone questioned how many of them were volunteers and how many were paid actors. Luckily, I was a part of that chain and can attest to the fact that all of us joined voluntarily. The only material benefits I got were McDonald’s and Chinese takeout for helping with the exhibition installation. It was such a good deal and I’ll do it again. 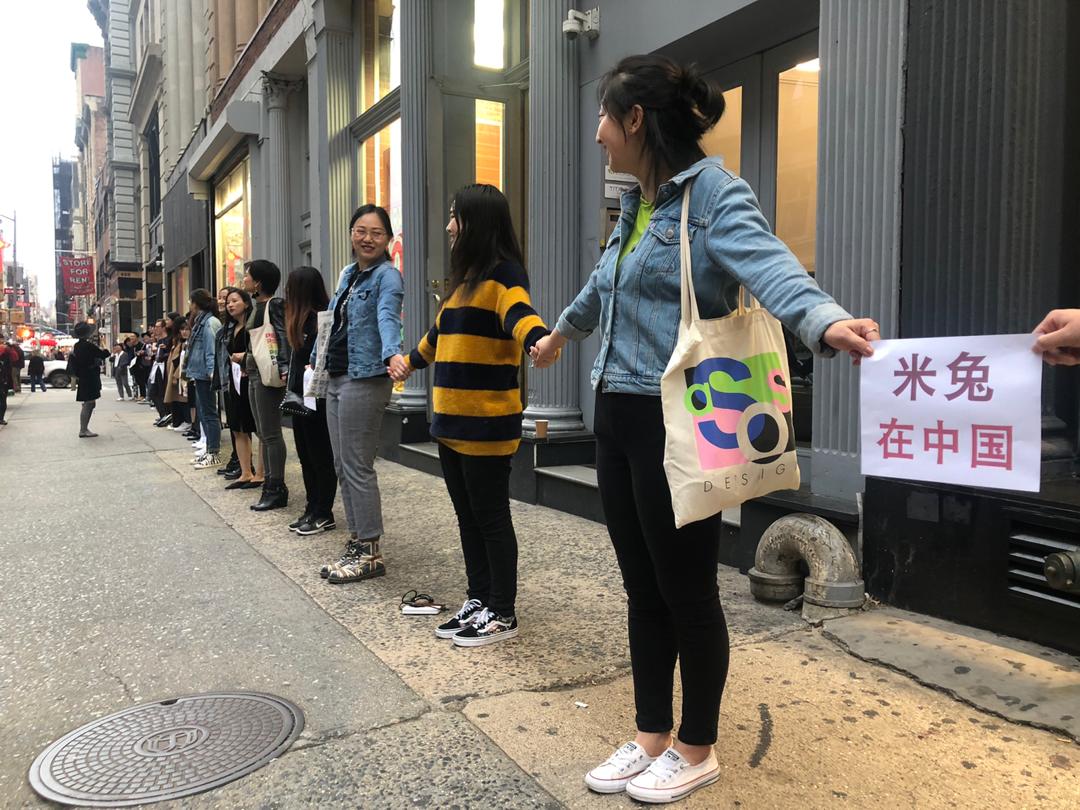 A human chain formed by protestors in Manhattan’s Chinatown. Photo by Lü Pin.

The current perceptions of the Chinese diaspora community and China-related activism held overseas raise several questions. With the network authoritarianism currently maintained by the Chinese government, many Chinese nationals lack context and understanding in self-initiated activism or the Chinese Feminist movement in general. The Communist party’s statement warning that foreign entities are using “Western feminism” to “interfere in China’s handling of women’s affairs” and urgently calling its people to “guard against Western ideological infiltration” certainly did not help the cause. [1] Students who were vocal about anti-sexual harassment were called to have “guidance meetings” with university personnel who threatened that further participation would damage their academic record. Others faced online harassment or got fired from the workforce. In essence, feminists were deemed as troublemakers, and everyone wanted to stay away from trouble. The state showed its serious intentions by enforcing crackdowns, detaining five feminists for 37 days in 2015 and carrying out varying degrees of abuse. The detained activists were later known as the “Feminist Five.” [2] 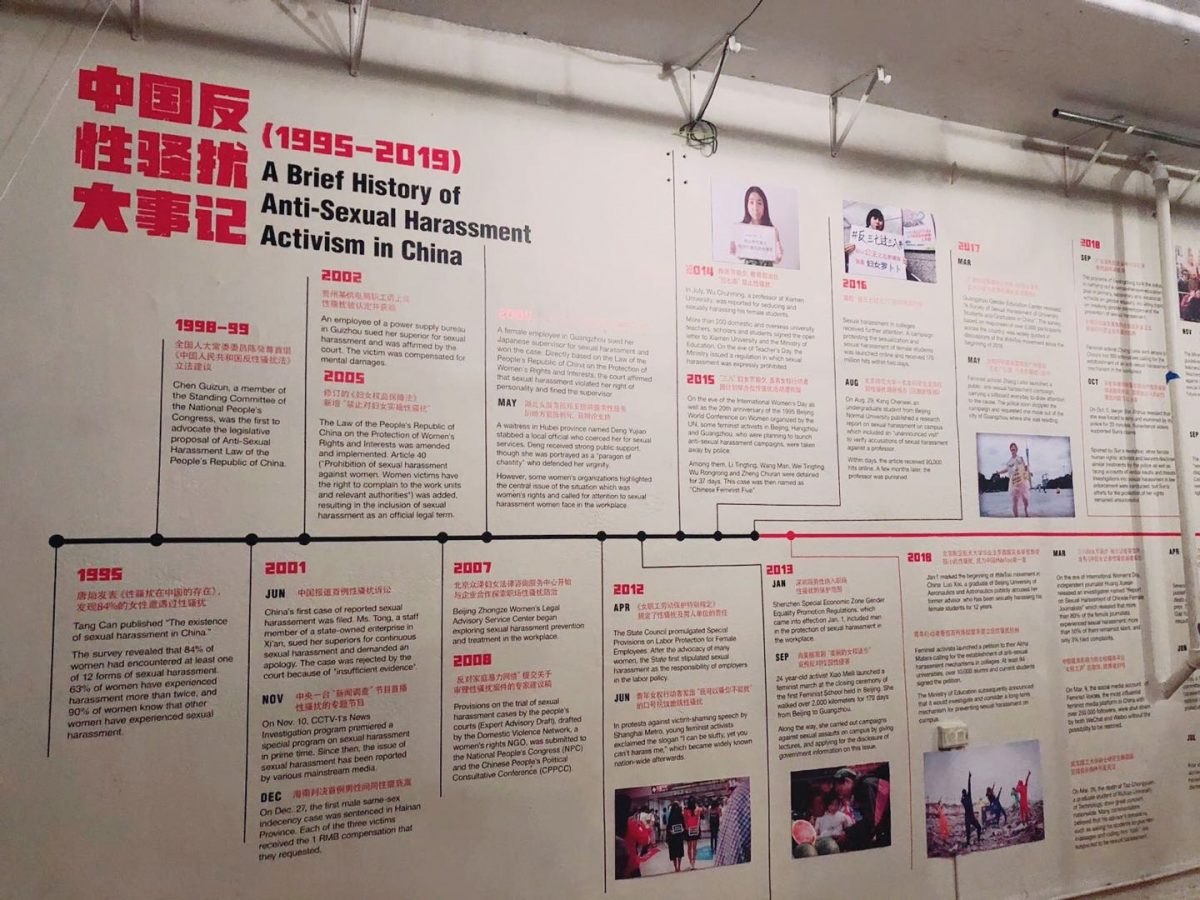 A brief timeline on the anti-sexual harassment activism in China featured at the exhibition.

Despite having a large and resilient community, members do need to face the increasing passivity in personal safety and expression. As the MeToo founder, Tarana Burke, has said in her recent talk during Celebration of the New, we have to be pragmatic while continuing to dream about a paradise of safety. [3] Personal well-being aside, maintaining the cause without government interference has a considerable advantage. They can now post information and resources without the risk of censorship, providing information to people in China. [4] The acts of resilience and continuous community building from Chinese feminist activists, in my view, is what Donna Haraway calls “staying with the trouble.” In Haraway’s own words, “staying with the trouble, yearning toward resurgence, requires inheriting hard histories, for everybody, but not equally and not in the same ways” [5]. To many people’s surprise, the international collective isn’t detached from their China-based network who are still fighting discreetly in consideration of safety. Together, they are building a tightly connected and unified force, creating a mode of symbiosis based on their situational advantages. Though disappointing to the everyday white saviour, a Chinese feminist collective based in your country doesn’t mean they need your rescue to achieve progress. Knowledge production and insights are never universal and are “always located within particular lives, circumstances, and histories of practice.” [6] 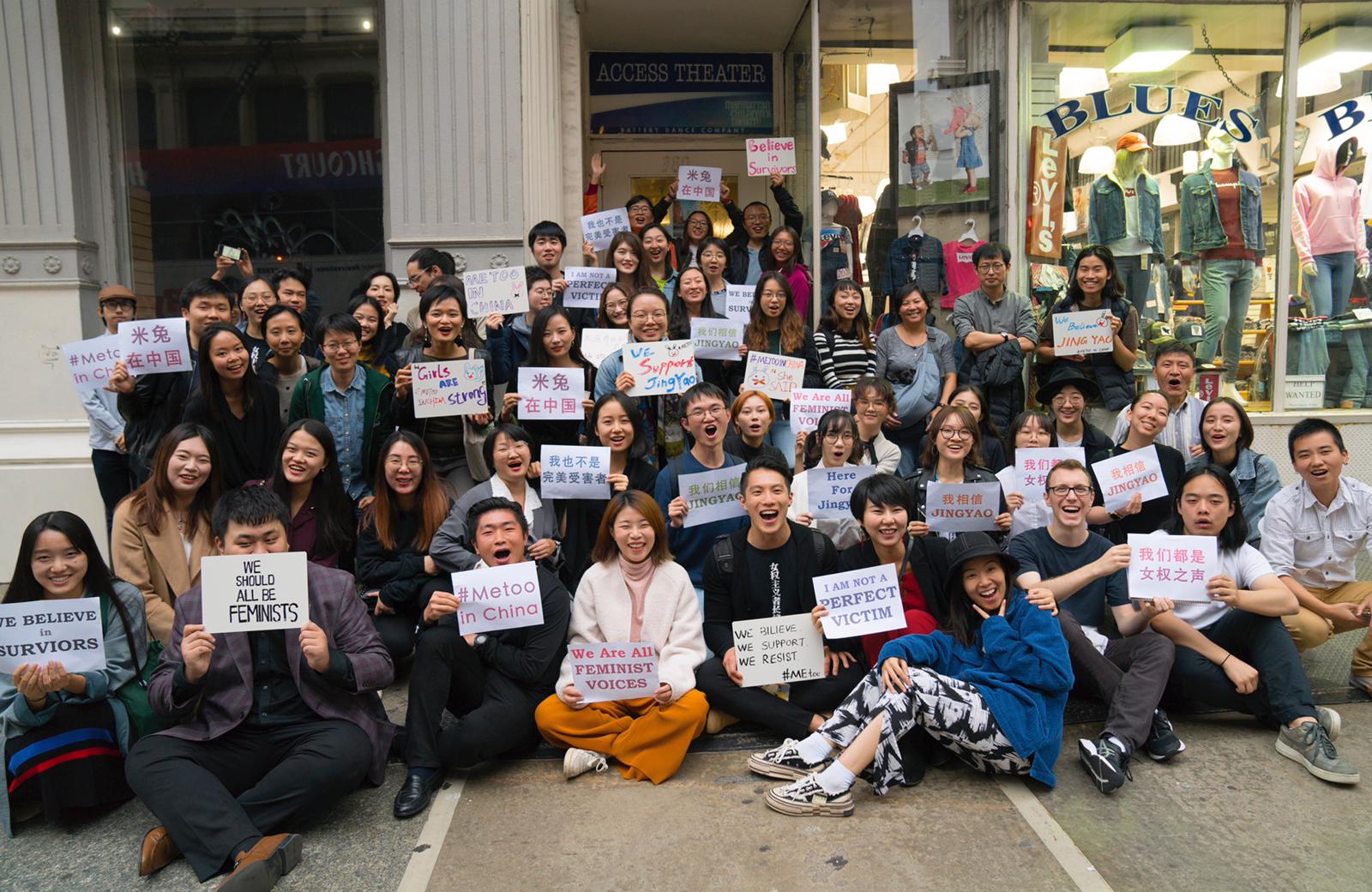 Supporters of the Chinese MeToo movement in New York. Photo by Jun Chen.

We are still living in a world that considers alienating women as the best course of action for society. [7] The institutionalized and state-sanctioned harassment inevitably resulted in trauma and indignation. However, these challenges also fueled further resistance and creative expression, bringing immense hope and strength to many affected. Although we are labelled as the voiceless, we know we have a voice and we want the world to hear it.